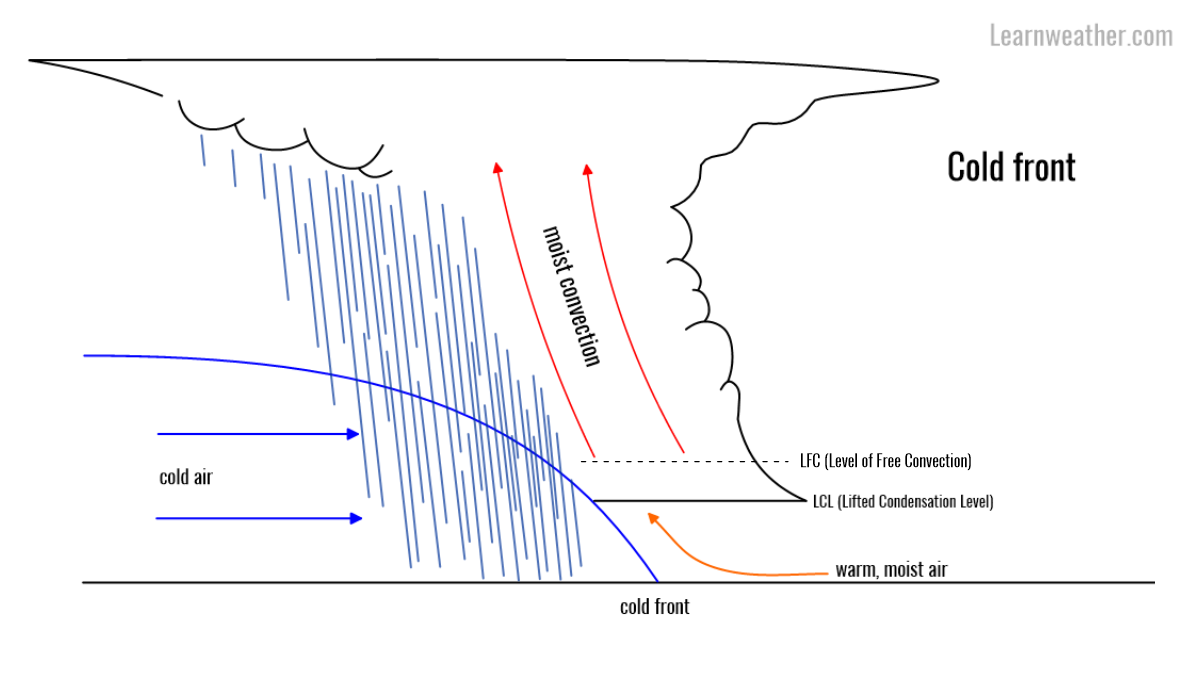 Air parcels at the surface buoyantly lift and require no other mechanisms to start lifting. There are other ways of getting air parcels at the surface to begin lifting, even if the air near the surface is stable (it is below convective temperature). There needs to be another lifting mechanism that pushes the air to a height where it becomes buoyant and begins to rise. The height at which moisture in the rising air condenses is now called the lifted condensation level (LCL)

A typical way of forcing air parcels upwards is along a boundary, such as a cold front or warm front. A cold front effectively bulldozes the warm air ahead of it, forcing it upwards. The case is reversed along a warm front: the warmer (less dense) air is forced over the wedge of cold air, which is being slowly pushed forward by the warm air (see figures below). The cold front can be a large (synoptic) scale front of the boundary of cool air flowing out of an already existing thunderstorm (outflow boundary).

The cold front pushes forward like a bulldozer or a wedge, forcing the warm, moist air ahead of it upwards. This upward motion helps initiate convection.

On a warm front, warm air pushes on the colder air ahead of it. As the warm, moist air is more buoyant than cold air, it is pushed up and over the cold air. The cold air forms a wedge, which is slowly pushed away by the warm air. More often than not, a warm front produces relatively shallow convection and mostly moderate rain showers. In some cases, thunderstorms also form on the warm front.

Warm air is pushed over the cold air, forming a wedge of cold air between the ground and the warm air aloft. Typically, the wedge angle is very low and the warm front produces little or no convection. In some cases, on more robust warm fronts, convection does occur and forms rain showers and, more rarely, thunderstorms.

There is a third, much more rare type of front, called a dryline. Along with this type of front, air temperature does not change much, but humidity (moisture content of the air) changes a lot. Drylines form near mountain ranges, and under the right conditions, also initiate convection.

Another way of initiating convection is orographic lift: air moves horizontally over flat terrain but is forced upwards when it encounters higher terrain (hills, mountains).

There is another mechanism that can assist in initiating convection without a convergence of surface winds or orographic lift. Upper-level forcing happens when winds at high altitudes (5-10 km) diverge, i.e. the airflow fans out. This creates an area of low pressure, which encourages vertical motion, which in turn helps moist warm air rise before reaching convective temperature.

Recap: when warm, moist air near the ground is heated by the Sun it may become warm enough to start lifting convectively. The temperature at which this process begins is called convective temperature. If this temperature is not reached, convection will not begin.

Other processes may help the air to rise and convection to begin, even if the convective temperature is not reached. These processes are known as forcing. Forcing mechanisms include fronts (warm front, cold front) and outflow boundaries (small-scale cold fronts produced by individual thunderstorms), surface wind convergences, orographic lift, and upper-level forcing.

We will go into much more detail about the initiation of convection (storm initiation) in one of the future tutorials.

There are many different kinds of measures of convective instability. The most common, and you will come across in virtually an in-depth forecast or storm chaser discussions, is CAPE = Convective Available Potential Energy. Chances are you have heard storm chasers and enthusiasts talk about this “CAPE this, CAPE that…”. CAPE is fuel for convection – and thunderstorms.

There are several variations of CAPE you are likely to come across: SBCAPE, MUCAPE, MLCAPE. We will cover this, and other measures of convective instability in detail in one of the future tutorials.

Fun fact(s): under the right conditions the rising air goes up really fast! While most thunderstorms form is moderately unstable conditions (CAPE up to ~1000 J/kg), in some cases there is much more energy available. This is called extreme instability and in such cases, CAPE values can reach 6000 J/kg and more. When thunderstorms form in this type of environment, the upward speed of rising air is extreme, sometimes over 150 m/s! This is enough to keep hailstones 15+ cm in diameter airborne!