A sting jet is a narrow core of violent winds that sometimes form within the rapidly intensifying North Atlantic and North Pacific extratropical cyclones, developing powerful windstorms towards the ground. Sting jets are associated with the strongest and most damaging windstorms resulting in violent, hurricane-force winds. How do they form?

The official definition of this meteorological phenomenon is the following:

The most damaging extratropical cyclones go through an evolution that involves the formation of a bent-back front and cloud head separated from the main polar front cloud band by a dry slot. When the cyclone is very close to reaching its minimum central pressure, the trailing tip of the cloud head bounding the bent-back front forms a hook that goes on to encircle seclusion of warm air.

The highest winds occur near the tip (nose) of this hook, the sting at the end of the tail. 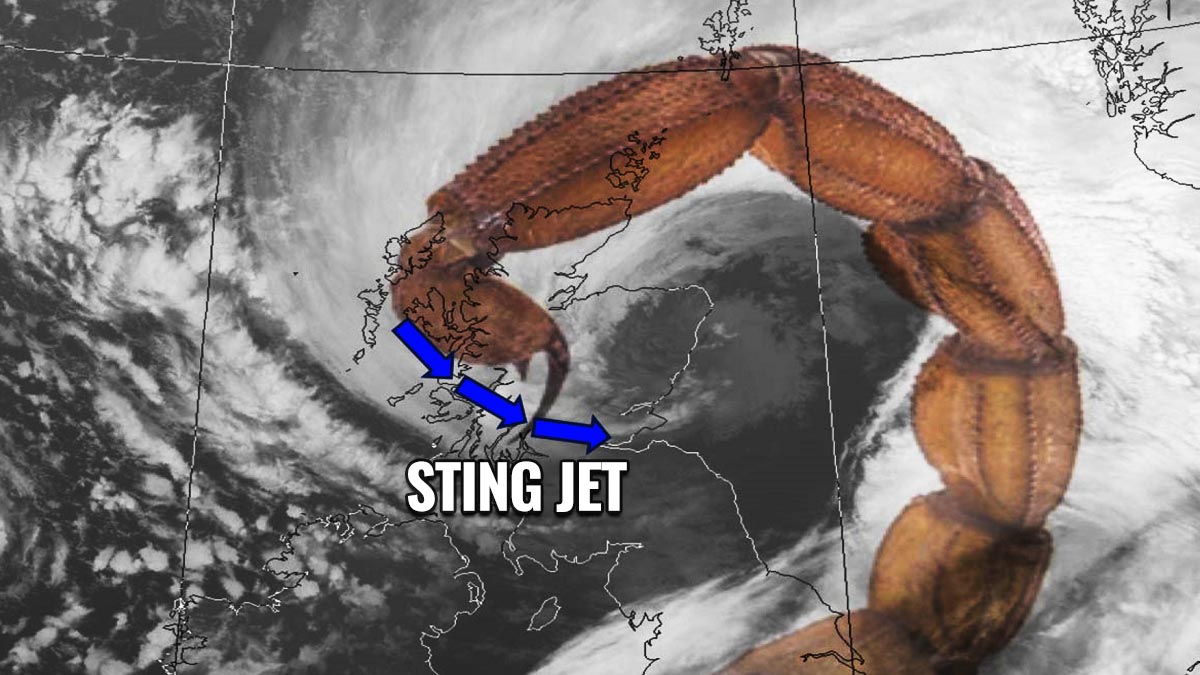 Sounds a bit too scientific? Well, it’s not that complicated. Let’s find out.

With numerous North Atlantic deep cyclones that often graze into western Europe with damaging winds and waves, some of those are very violent with major tree and structural damage. Over the recent years, there were Storm Eunice, storm Leslie, storm Jorge, storm Ophelia to name a few.

Sting jet is the meteorological phenomenon that is blamed to produce violent, hurricane-force winds with the most notable events so far. This phenomenon results in a swath of particularly intense winds, often leading to peak wind gusts well above 150 km/h (90 mph). Sometimes even surpassing the 200 km/h (125 mph), causing extensive severe damage. 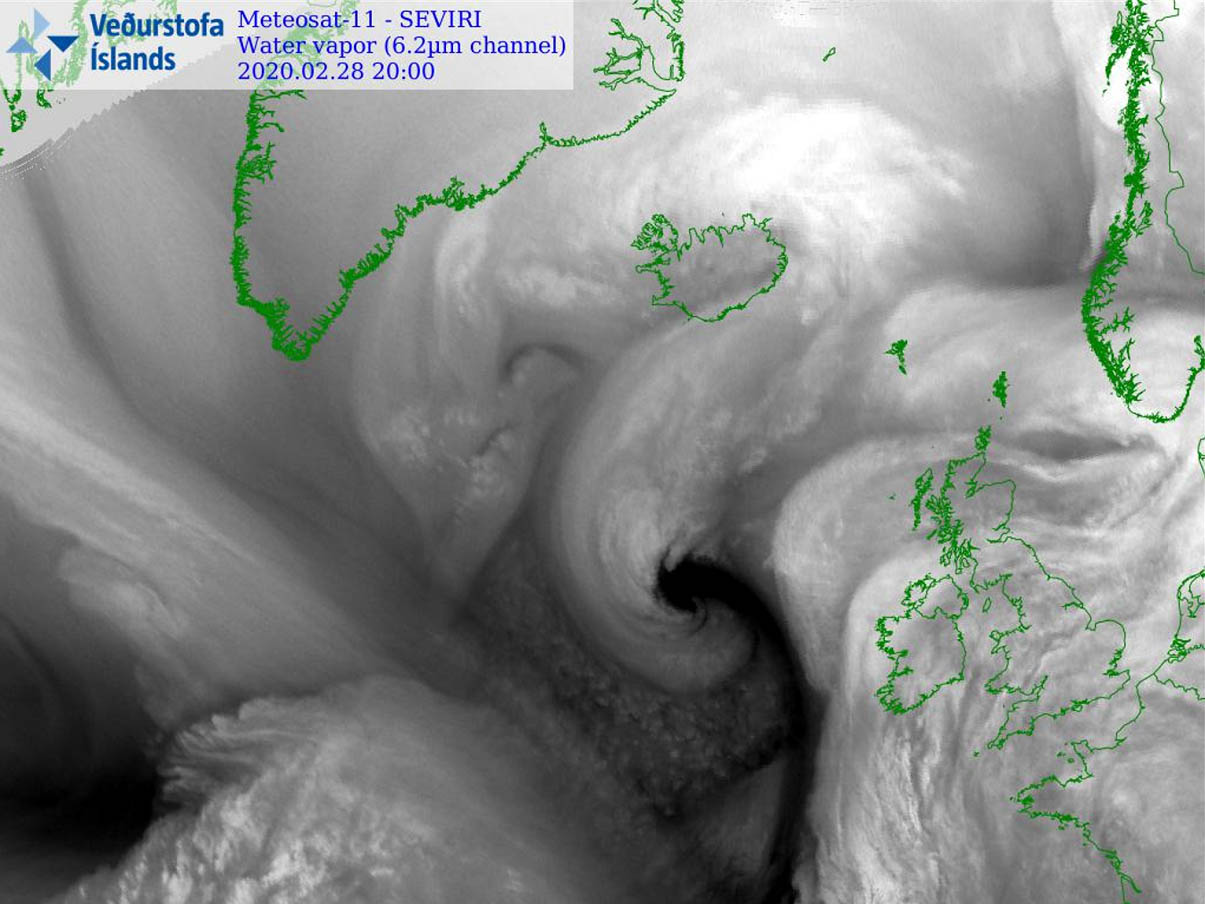 A sting jet is a relatively narrow zone of the very powerful wind maximum, originating from the inside of the mid-tropospheric cloud head within the explosive cyclogenesis or a bomb cyclone in the Atlantic or the Pacific Ocean.

HOW A STING JET FORMS?

The extratropical cyclone has two frontal zones, the warm front, and the cold front following it. A strong flow of cold air develops into the cyclone ahead of the warm front, known as the cold conveyor belt. 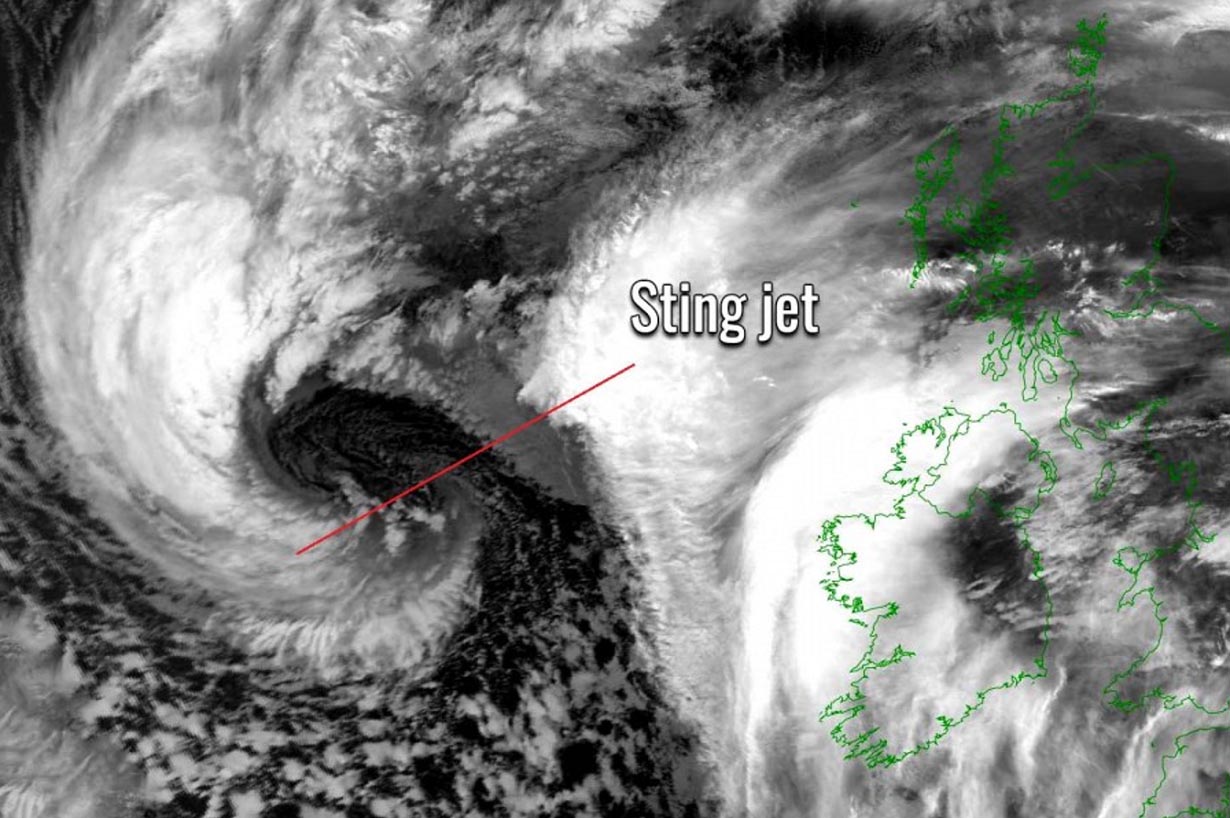 Above: Textook example of a Sting jet

The cold conveyor belt brings cold and moist air towards the center of the rapidly developing extratropical storm, together with precipitation such as rain and snow. While the dry intrusion brings cooler and very dry air into the cyclone.

As the precipitation from the cold conveyor belt falls into the layers of air within the dry intrusion streak, droplets are quickly evaporating and leading to further cooling of the air mass. This is a process known as evaporative cooling. 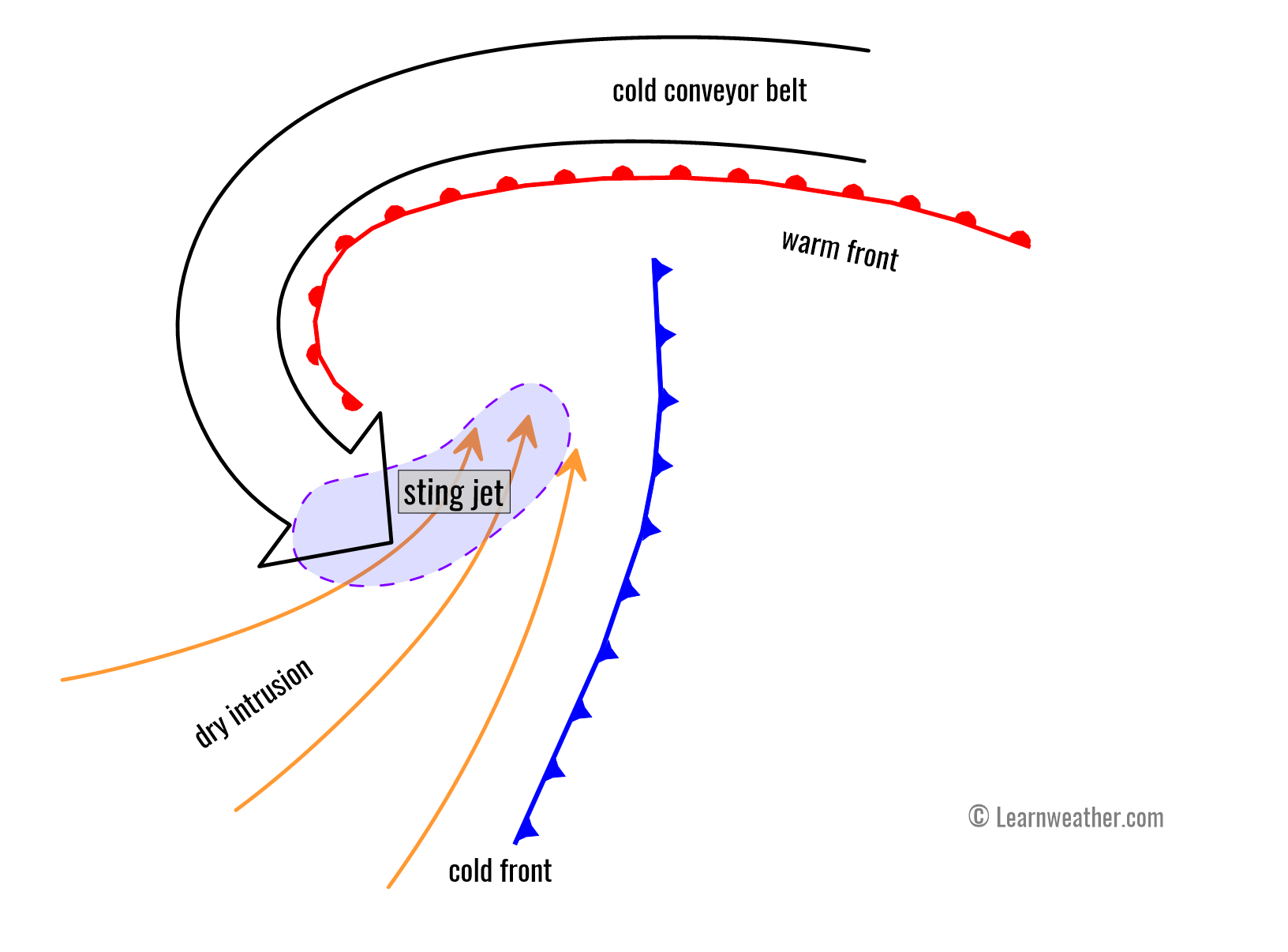 Above: Schematic view of a Sting Jet formation

At the final stage of the sting jet process, strong winds descend towards the surface and are intensifying further as the air parcels are drying out. These winds are grazing through the layers with the evaporation of the air on the nose of this descending jet. Thus, creating a clear path through the precipitation with the evaporative cooling process, leading to the air becoming much denser within the jet.

The result is the acceleration of the downward momentum or, in other words, very strong winds are pushed down with higher force towards the tip of the cloud head when it wraps around the cyclone dead center. 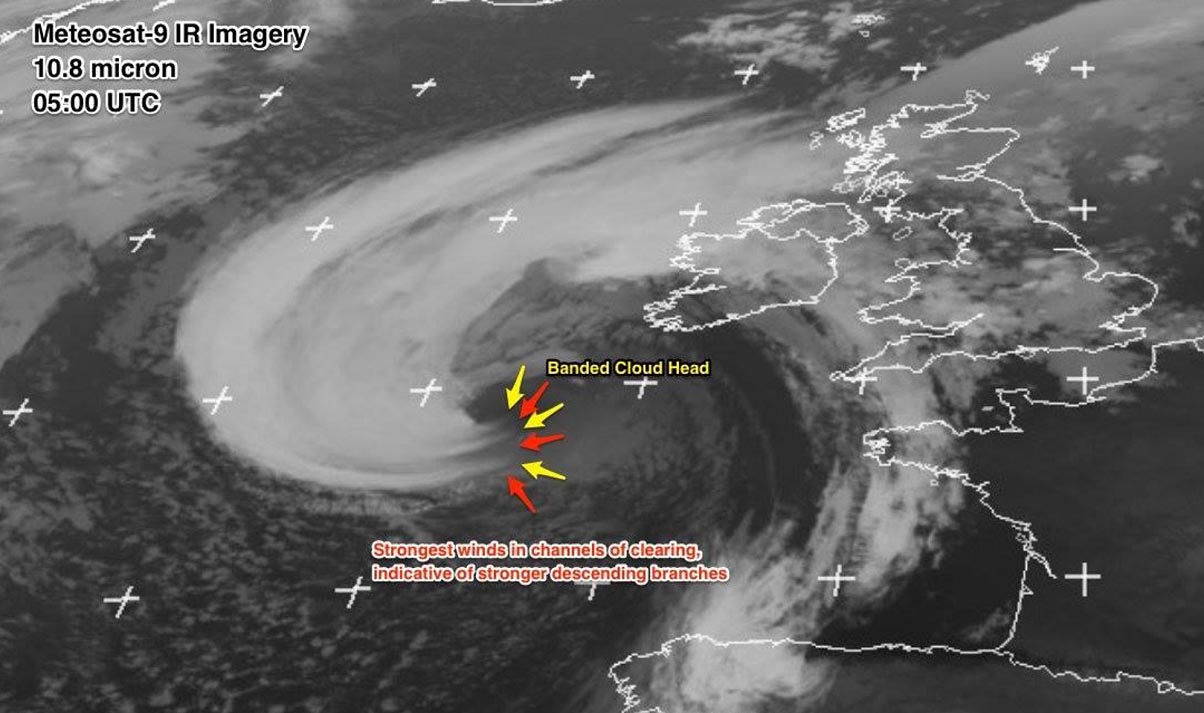 Above: Banded cloud head on the nose of a Sting jet

All these processes with the sting jet are occurring at altitudes up to about 3-4 km above sea level surface. The cooled air being much denser than the surrounding air descends rapidly to the surface, producing even stronger winds within the already intense wind field of the cyclone. The entire region of this cooled, accelerated airflow is narrow, forming what is known as a sting jet.

Once the sting jet is fully developed, this wind maximum is also very easily recognizable on the satellite imagery as the shape of the cyclone’s comma cloud is hooked just like a scorpion’s tail. This gives this dangerous wind region its famous name. 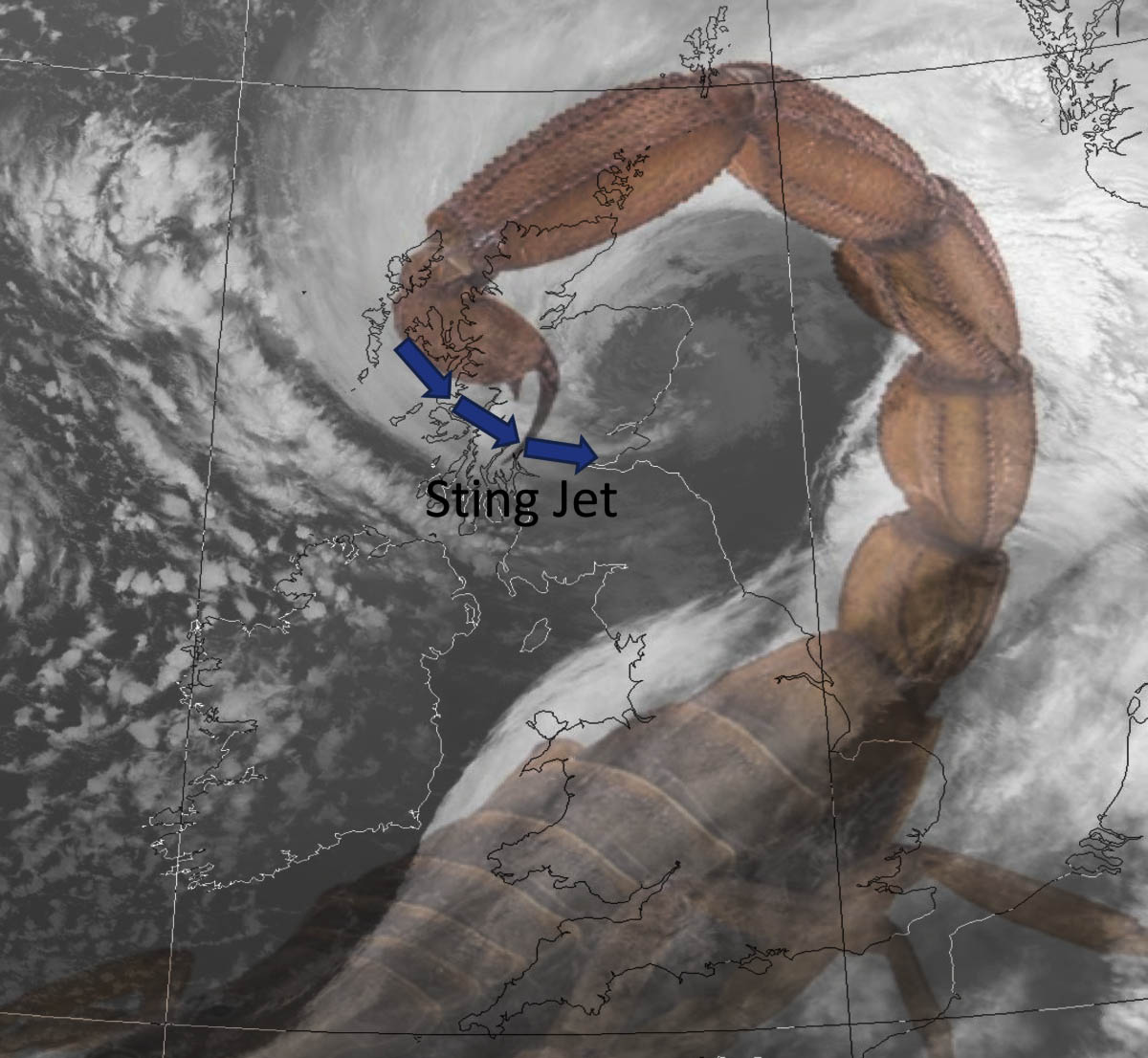 The composite satellite image above hints at the textbook example of the cyclone overlapped with a scorpion’s tail. Looks familiar, isn’t it?

As mentioned earlier, a sting jet usually affects only a small region of about 100-200 km (100-125 miles) across and is compared to the size of the parent large bomb cyclone pretty narrow. The phenomenon usually lasts only for several hours, but if it spreads across the land, destructive winds will occur. 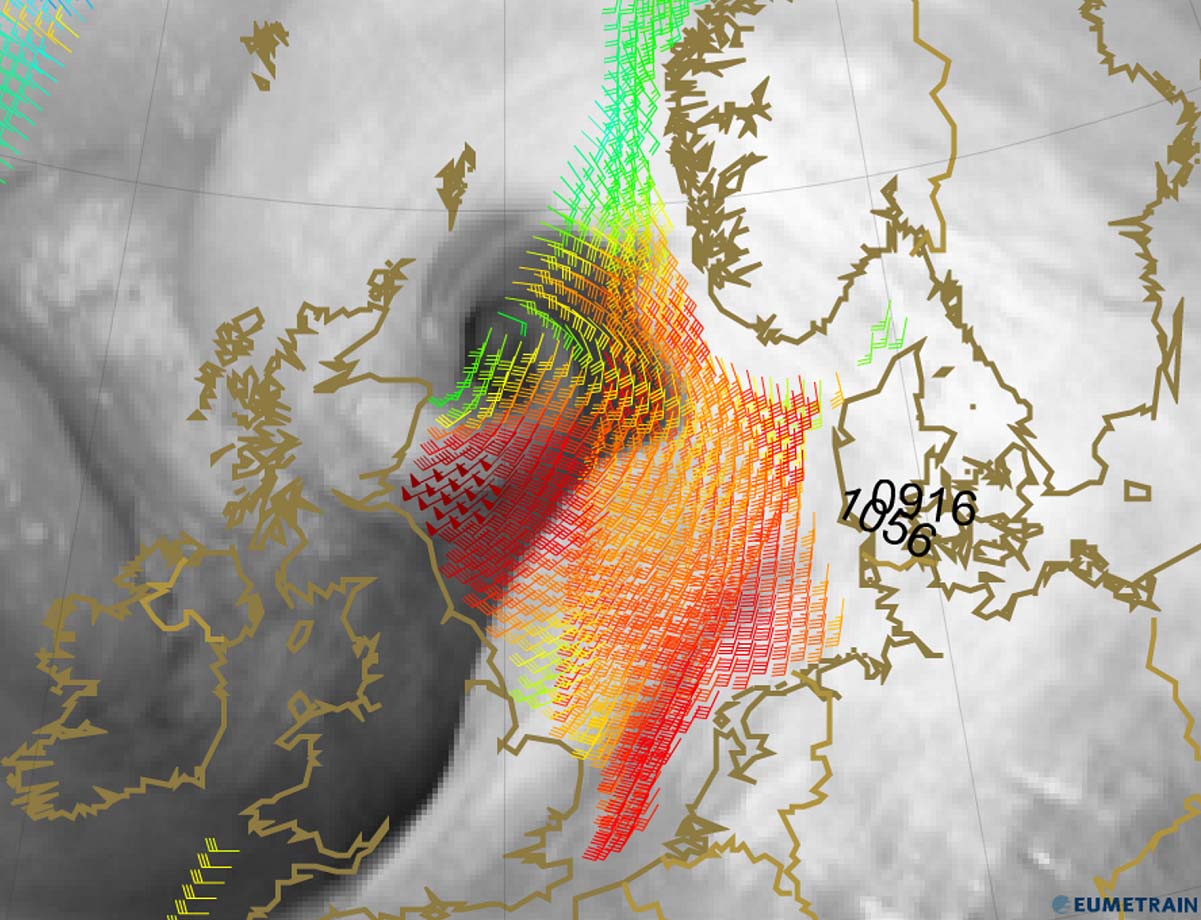 Above: Wind analysis across the extratropical cyclone

When we see Atlantic storms developing very rapidly or explosively, we can expect their typical satellite appearance of the banded cloud heads could be resulting in sting jets. The cloud head is strongly curved towards the core of the cyclone from where the most intense winds will likely blast towards the surface.

These cloud bands on the edge of the comma cloud will disappear quite sharply on the nose of the sting jet. This happens due to the effect of strong evaporation of the air parcels within the dry intrusion.

How do we forecast these events?

Sting jets are actually quite difficult to forecast as they are relatively small in size, and because it also depends on how the cyclonic system has developed from its initial stages. However, with the high-resolution weather model forecast charts nowadays, we are able to recognize the streaks of particularly violent winds inside the strong wind field with the cyclone in general. 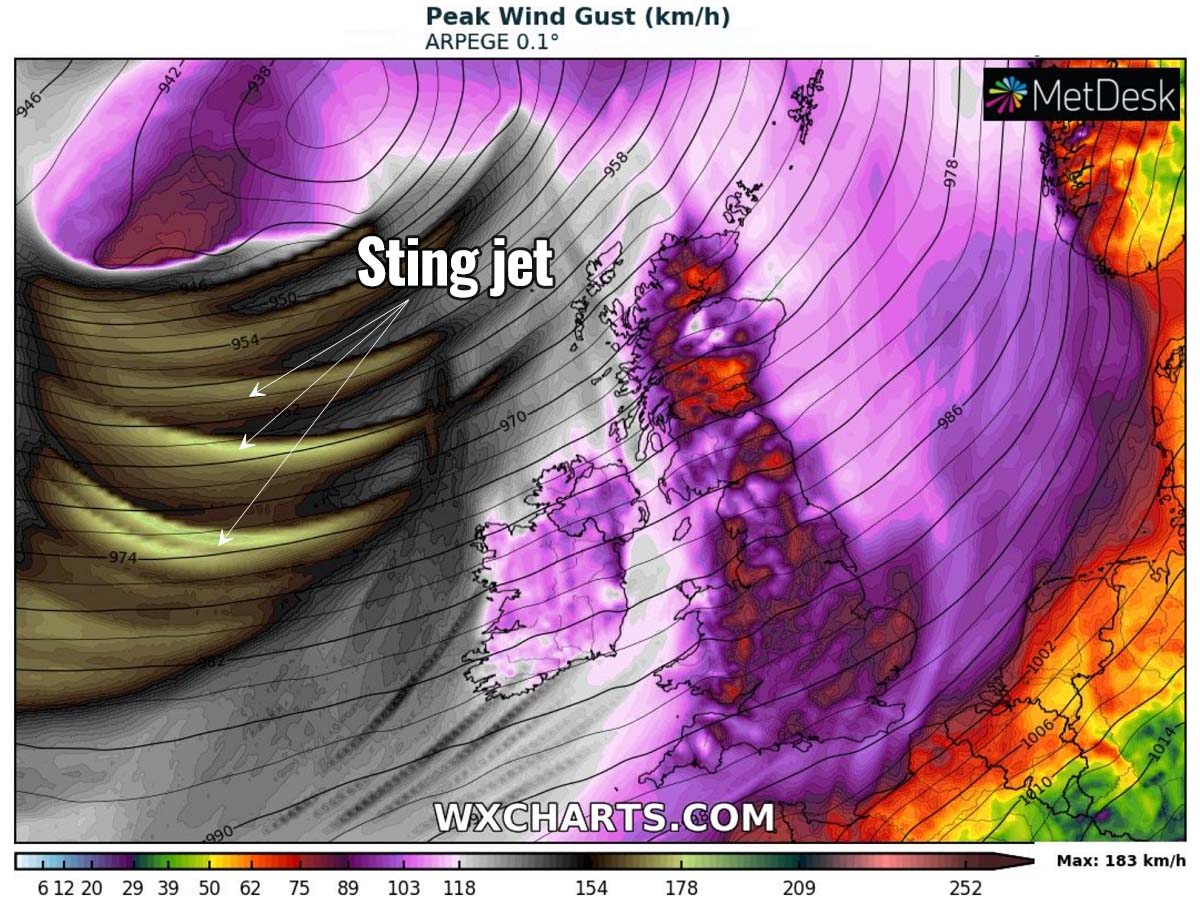 Above: An example of wind gusts forecast

Of course, as we have seen above, we are also able to spot the sting jet developing on satellite images, using various channels and spectrums. As we learned, the end of the cold conveyor belt hints at the sting by a hook-shaped cloud. The look of it like the sting in a scorpion’s tail can also hint that this wind maximum has developed.

We often use satellite images representing the amount of water vapor in the air, those are usually made up of light and dark shades. The darker the shade is painted, the less water vapor is present there. As we know that clouds are made when water vapor condenses into water droplets, but around the sting jet, there are often dark fingers of air stretching out, telling us that the rollercoaster of wind is also very dry. A small core of fast-moving, cold, dense, dry air.

Not every deep extratropical cyclone develops a sting jet. In fact, this phenomenon is still known as a quite rare event. Sting jets have been confirmed on only about two dozen of the most intense cyclones over western and central Europe.

The Isle of Wight, the largest and second-most populous island of England, reported a record-breaking wind gust of 196 km/h (122 mph) for England during the windstorm Eunice on February 18th, 2022. This wind gust has surpassed the previous record of 190 km/h (118 mph) set at Gwennap Head, Cornwall in 1979. 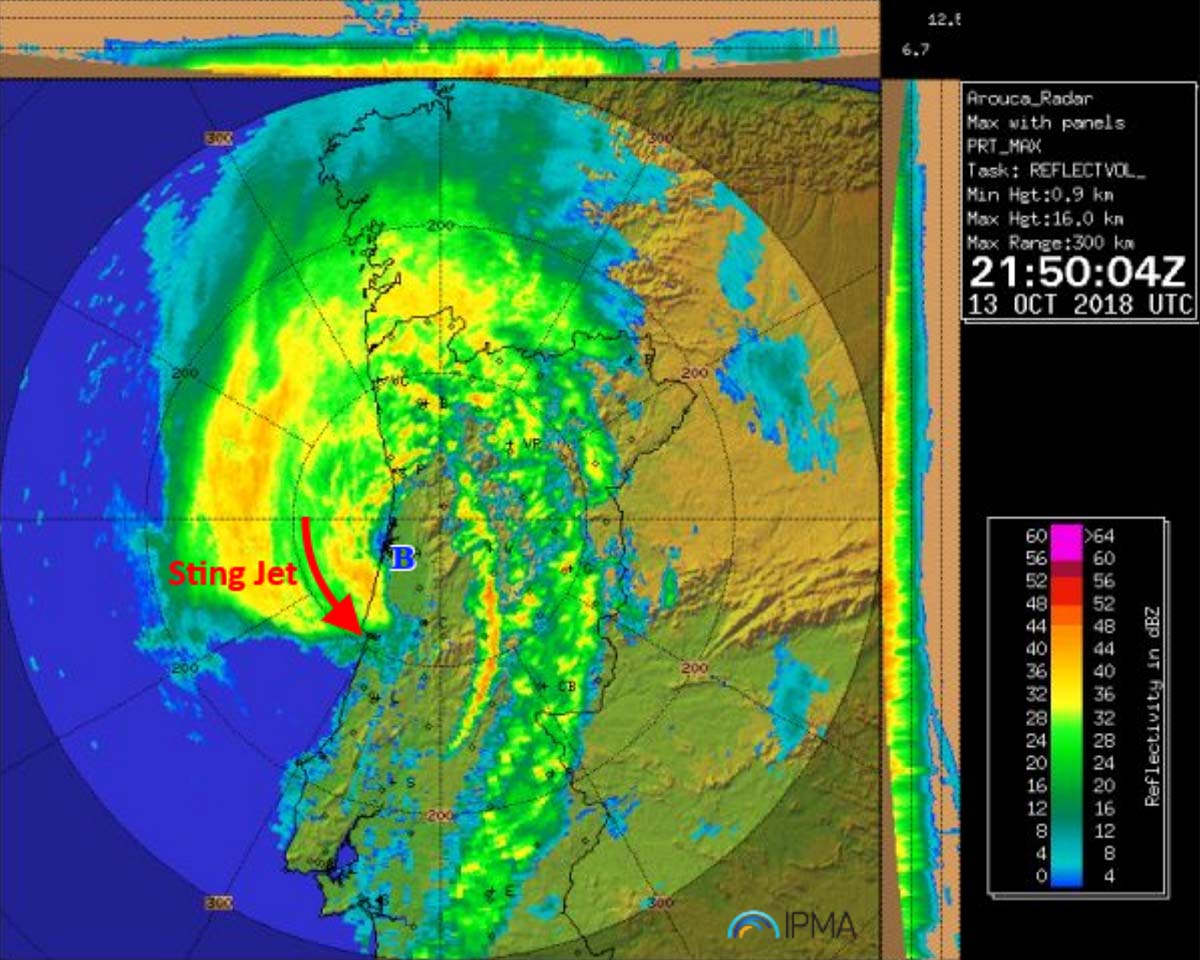 Above: Radar image of Storm Leslie with damaging sting jet

An intense cyclone Oratia (Tora in Norway) in late October and early November of 2000 produced winds gusting up to 176 km/h (110 mph) in Camaret-Sur-Mer, France).

A damaging cyclone Ulli (early January 2012) produced winds up to 172 km/h in Ijmuiden, the Netherlands. 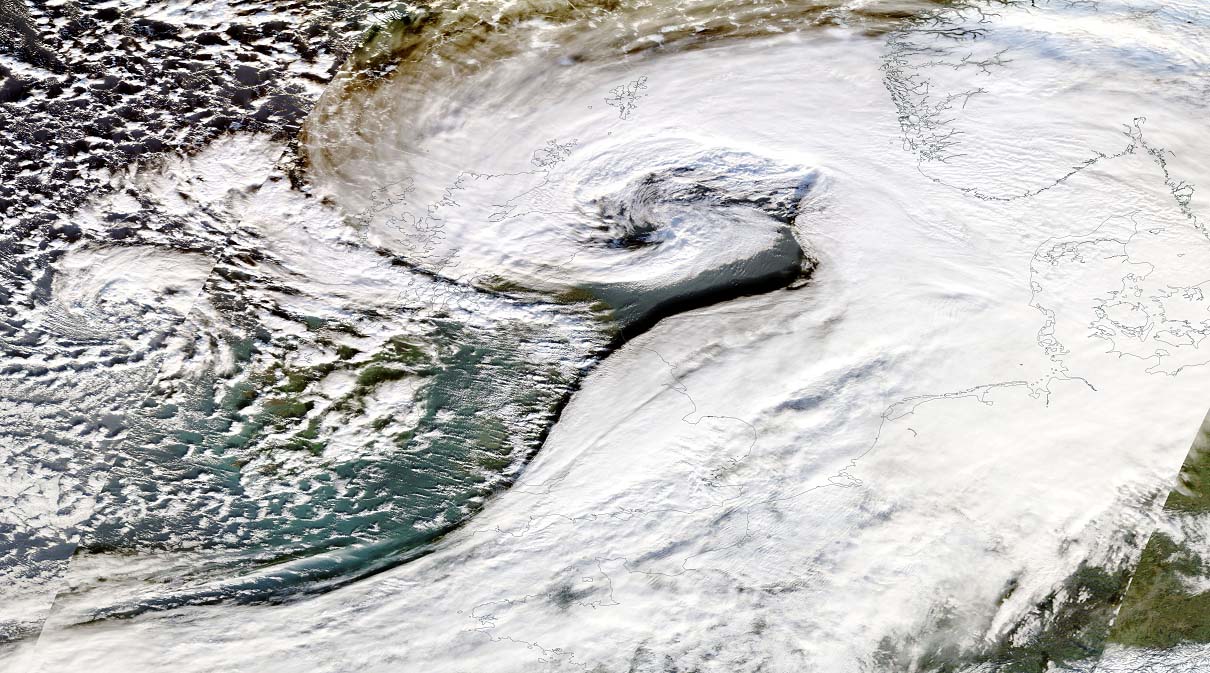 Here are more details on some of the major major windstorms in western Europe over the recent decade: