Weather in the United States and Europe depends strongly on the North Atlantic ocean currents, specifically the Gulf Stream. So it’s important that we understand what and where they are and what their changes mean for our weather in the future.

WHAT IS THE GULF STREAM

The Gulf Stream is a powerful ocean current that brings warmer waters up from the Gulf of Mexico into the North Atlantic Ocean. It extends all the way up along the eastern coast of the United States, where it then turns towards northwest Europe.

Below you can see a rough outline of the Gulf stream and how it flows across the North Atlantic. It does not actually flow in such a nice straight line, but as you will see, it is much more complex and full of small and large swirls. 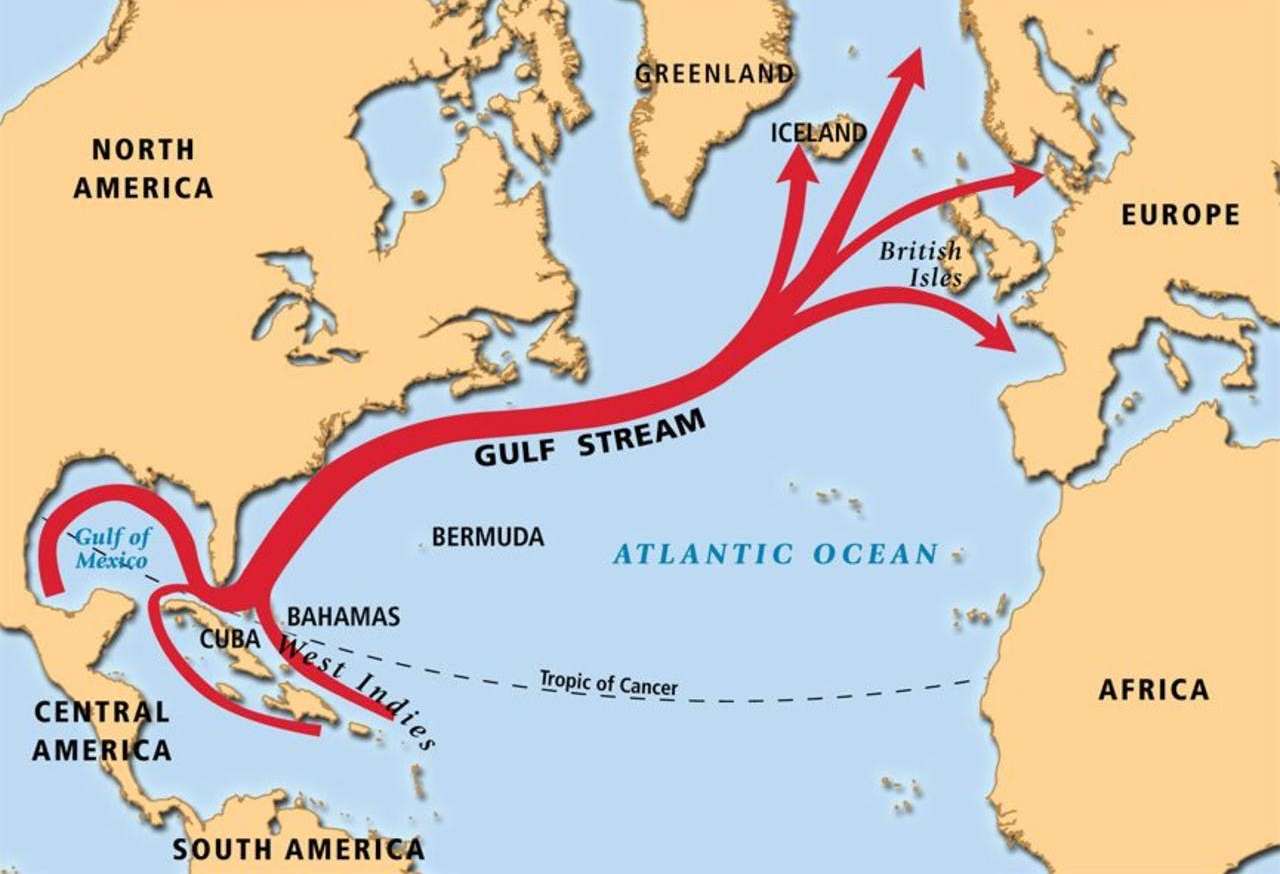 The warmer waters of the Gulf Stream directly influence the climate of Florida. Compared to other southeastern states, it keeps temperatures in Florida warmer in the winter and cooler in the summer. Since the Gulf Stream also extends towards Europe, it helps to warm the western European countries, having a major impact on the regional climate. 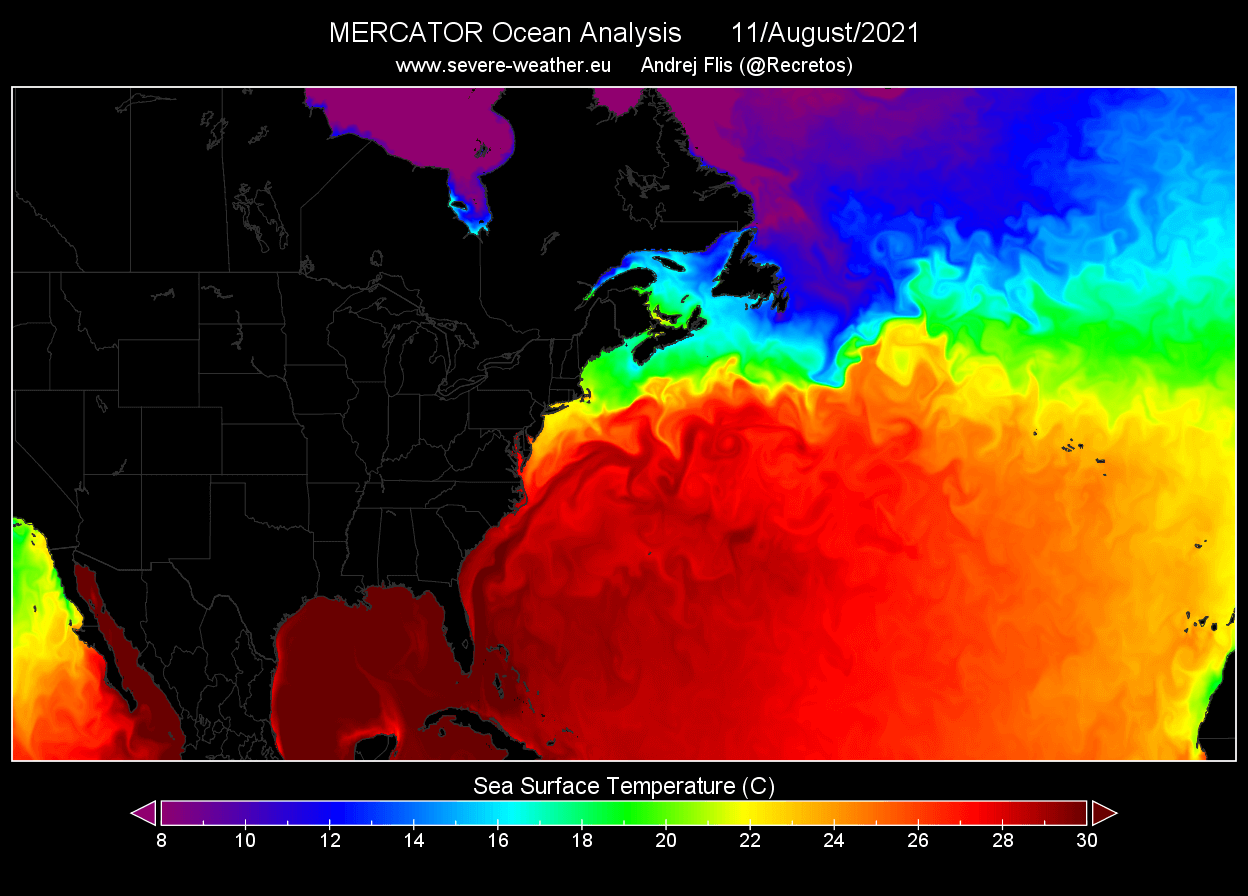 This is the Gulf Stream in all its glory, transporting essential warmer waters up towards the northern regions of the Atlantic Ocean. As a contrast, you can see the cold Labrador Current flowing down along the east Canadian coast.

We produced a high-resolution video animation, which shows the Gulf Stream in motion. You can nicely see how the warm waters flow up along the east coast of the United States throughout the year, keeping steady warm temperatures even during the winter. 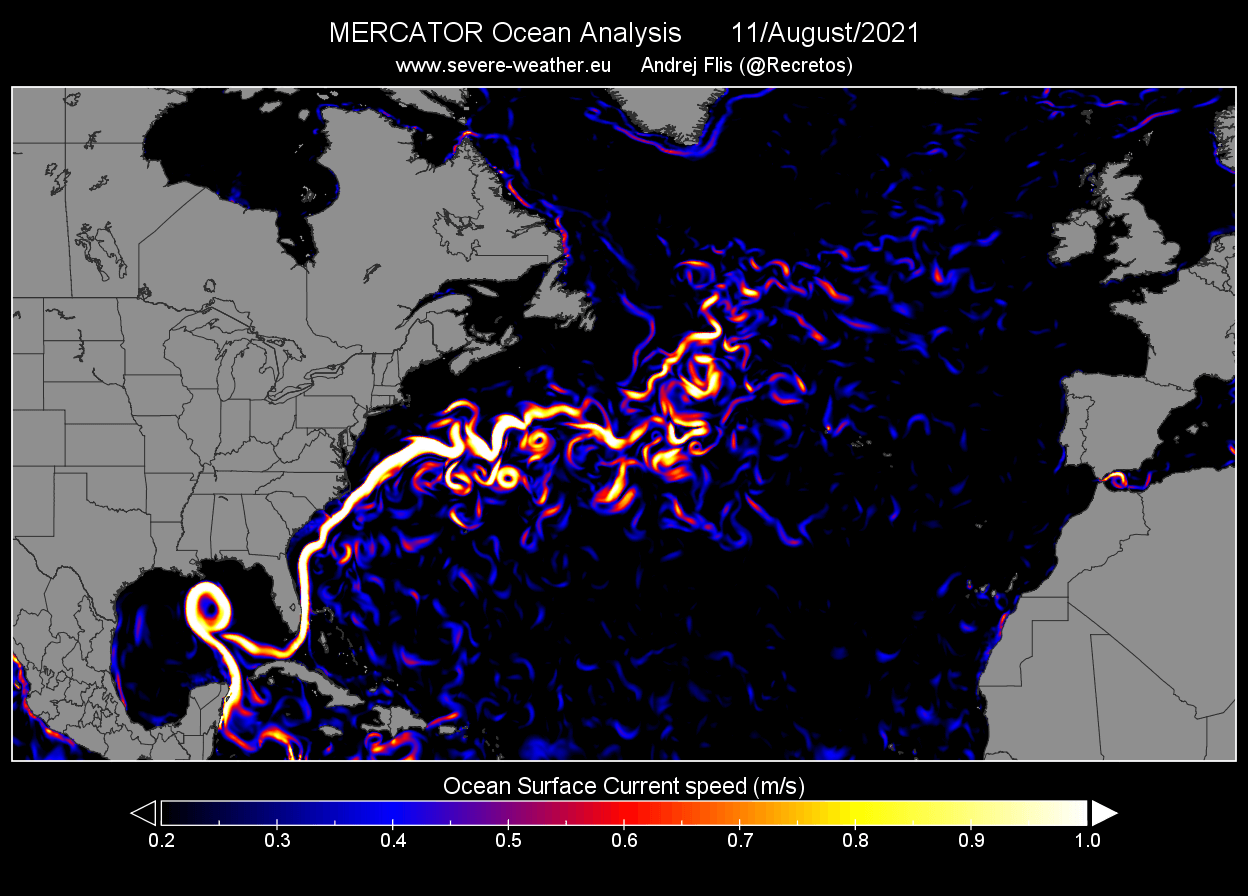 This ocean current does not flow in a straight line, as seen in many diagrams. It is actually much more complex, with a lot of dynamics across the North Atlantic. It has a lot of smaller swirls of water, both warm and cold. This is very similar to the way the atmospheric jet stream works.

Looking at the entire world, we can see that the Gulf Stream is not the only one of its kind. There are many areas with persistent ocean circulation. Most notable is perhaps the Japan Current (Kuroshio), which is very similar to the Gulf Stream in its activity. 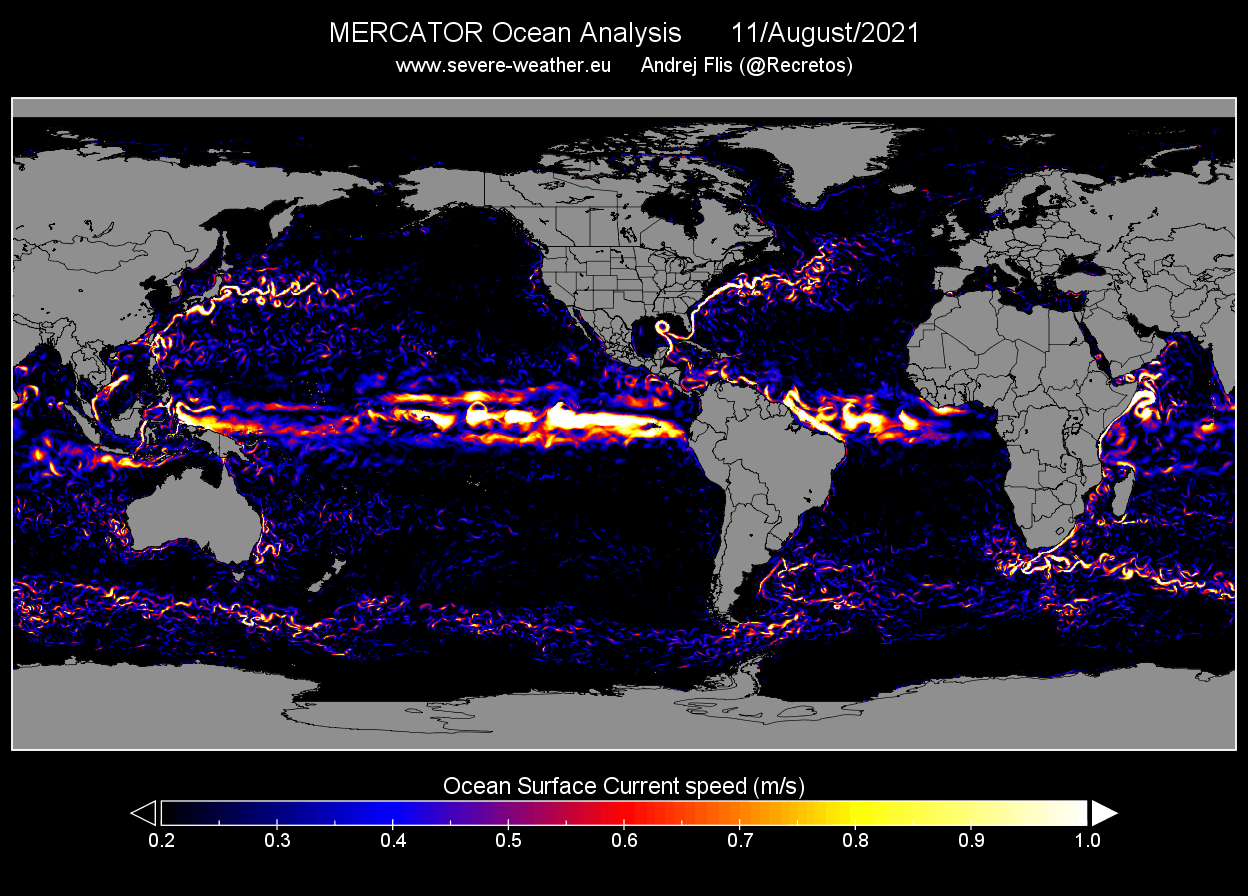 The larger system in which the Gulf Stream flows is called the Atlantic Meridional Overturning Circulation, or AMOC. The AMOC is a large system of ocean currents in the Atlantic Ocean, driven by differences in temperature and salt content, which affects its density. The Gulf stream is just is the surface part of the AMOC in the North Atlantic.

The image below from the UK Met Office shows a rough outline of the entire global ocean circulation system. It comes with many different names, but most notable are perhaps the Global Conveyor Belt or the Thermohaline circulation. AMOC is the ocean current system that covers the North and South Atlantic. 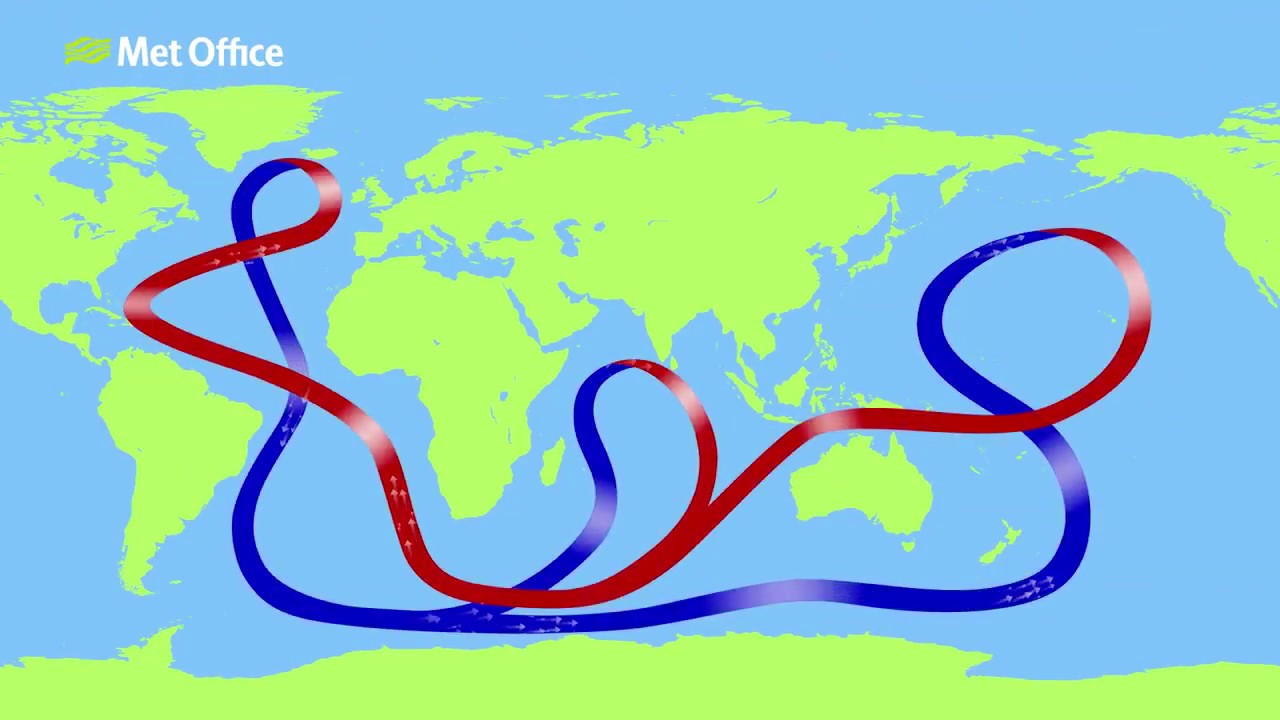 But what is actually driving the ocean currents in the North Atlantic?

As the Gulf Stream transports warm waters northwards, it starts to cool, as it releases a large part of the heat. Evaporation also occurs along the way, increasing the salt concentration in the ocean.

Lower temperature and a high salt content make the water denser and heavier, so this dense water will start to sink down into the ocean. Sinking water causes movement and momentum, pulling down more water from the surface, creating a stable overturning flow.

The image below shows ocean surface salinity or the amount of salt in the water. Higher the number, the saltier and denser the water. Above 35, we still have salty waters, so as the water cools, it gets denser (heavier), and sinks down in the far North Atlantic. 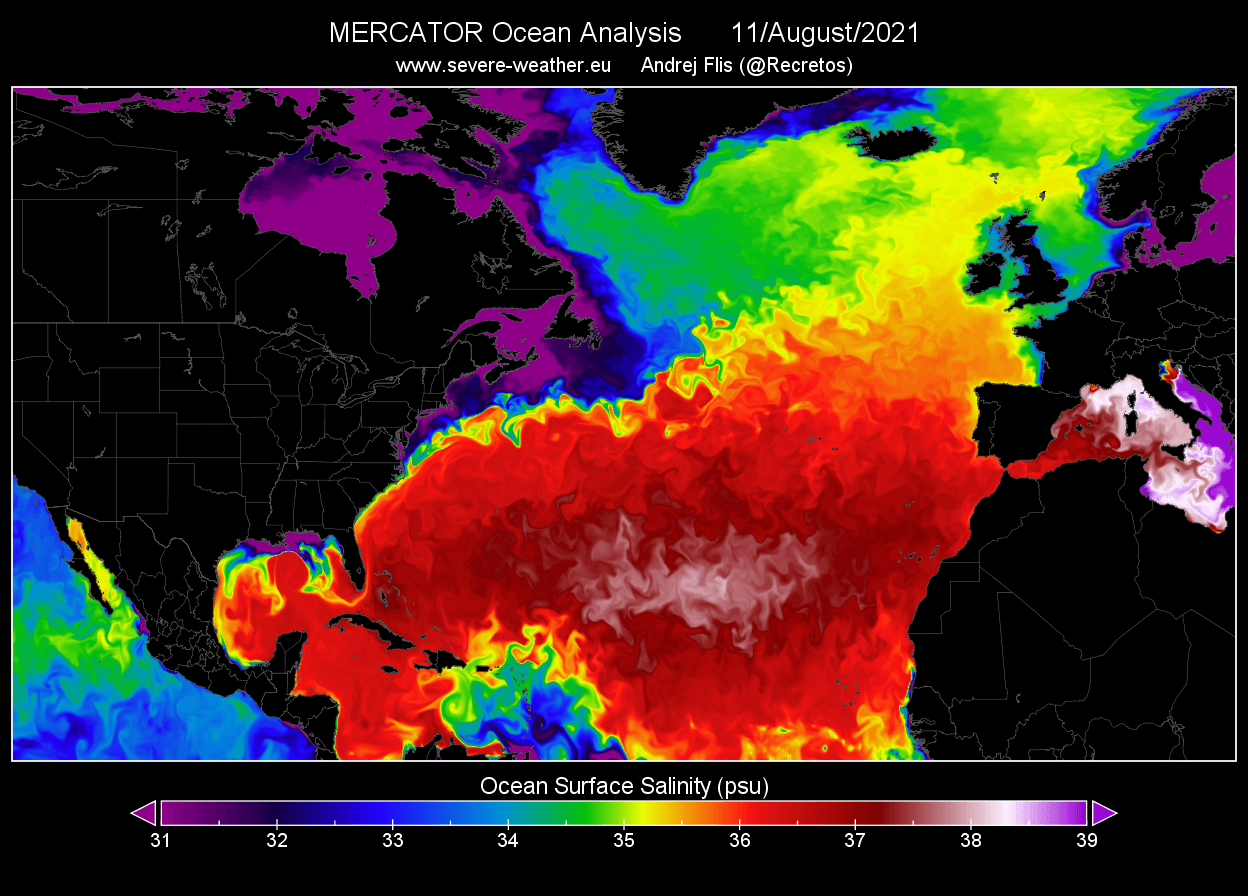 The cold, dense water slowly flows southwards, several kilometers below the ocean surface. Eventually, it starts to rise back to the surface and warms in a process called “upwelling”. And with that, the circulation is complete.

The reason why this is important is that the AMOC is an essential part of the weather and climate in the Northern Hemisphere. It transports a lot of warmer waters and energy towards the north. The schematic below shows the outline of the North Atlantic part of the AMOC, of which the Gulf Stream is a part. 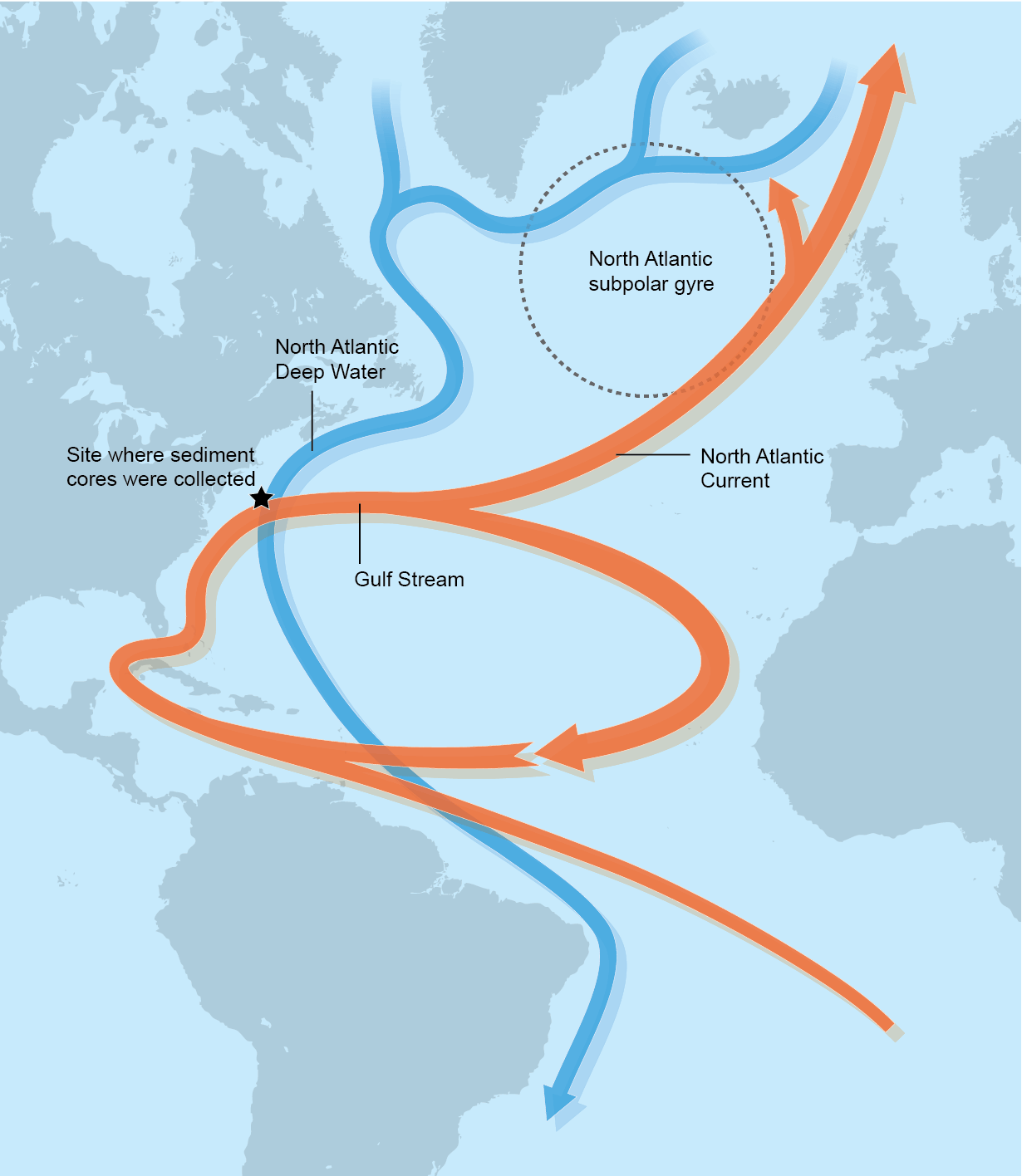 We produced a special graphic below, which shows why the Gulf Stream and the Ocean currents in general, are so important for the weather. The image shows the average January surface temperature, for the past 42 years. What you can see is the large temperature difference between the far North Atlantic and Canada for example. 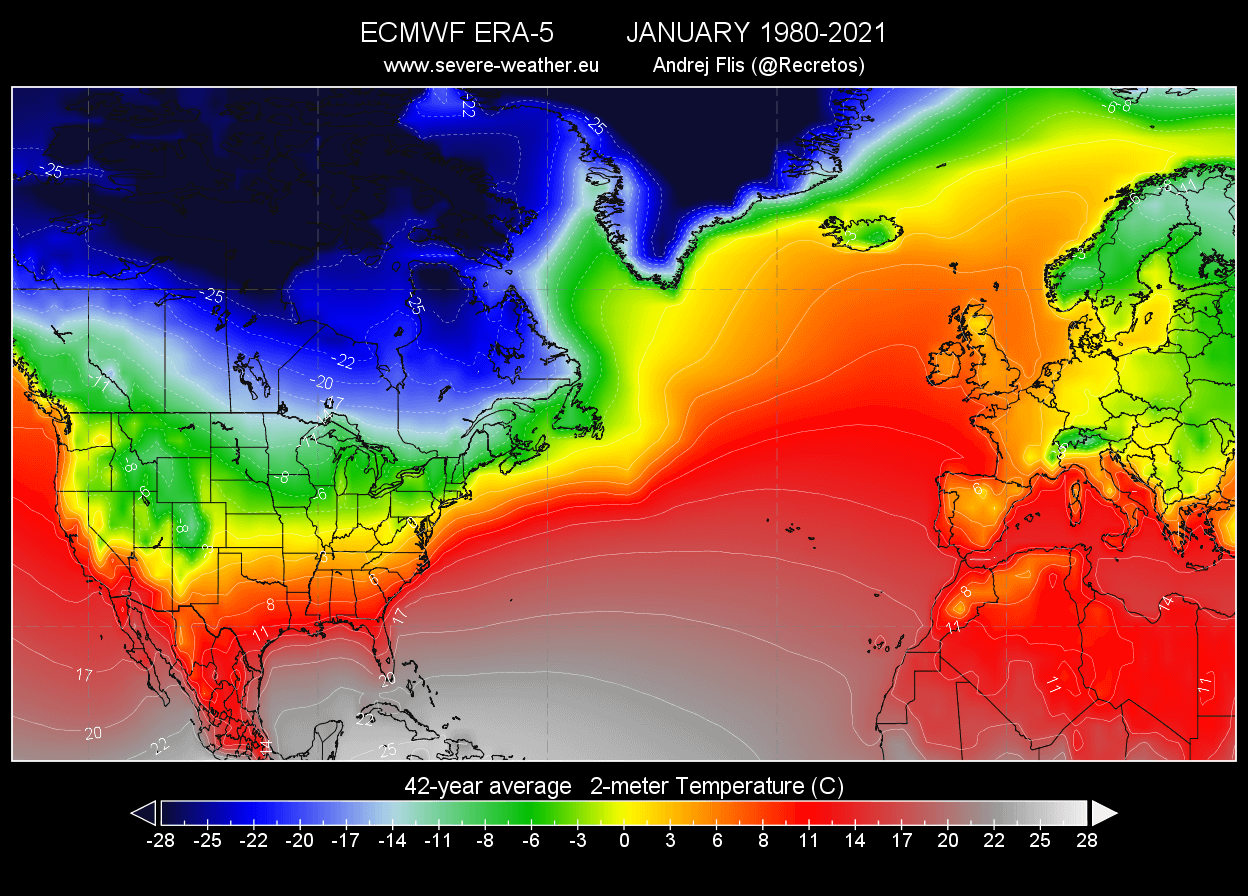 We can look at the same latitude line, for example, 60 degrees North, along the tip of Greenland. You can see that there is almost a 30°C difference between the North Atlantic and southern Canada. Going further North the temperature difference is just as large.

The difference in winter climate between the United Kingdom and southern Canada for example is really big. This would not be possible without the warm Gulf Stream. It brings warmer waters towards the North, keeping the climate milder in Europe.

Since a lot of our readers are more familiar with the Fahrenheit temperature scale, we produced the same graphic, but in Fahrenheit degrees. You can see that the large difference of 50-60 degrees F, between the far North Atlantic and southern Canada for example. 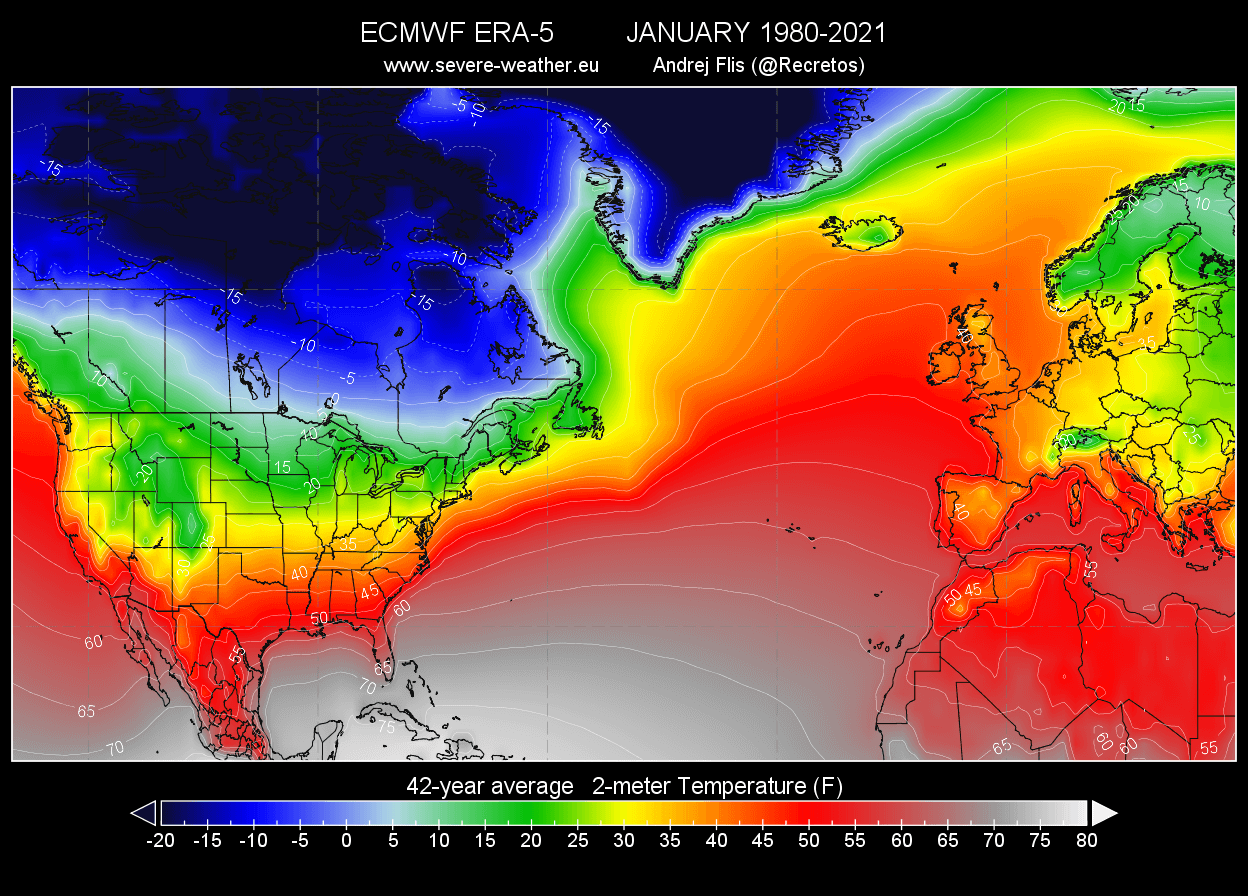 You can also see the warmer climate along the east coast of the United States. This is also partially affected by the warm ocean current, bringing milder conditions, thanks to the warmer ocean waters. The Gulf Stream allso has an effect in summer, and on thunderstorm activity, as it provides warmer waters and air temperature.

But first, focusing on the far North Atlantic part of the AMOC, we can see that it is very complex. Warmer waters are being transported far beyond the British Isles and Iceland, reaching quite deep into the Arctic Circle.

Looking at the actual ocean temperatures from last February, you can see positive temperatures of 6-10 degrees C (43-50 degrees F) reaching into the Polar Circle. dark blue temperatures are an indication of sea ice. We used the winter (February) data, because the temperature contrast is greatest in winter, and the warm ocean currents are most nicely seen. 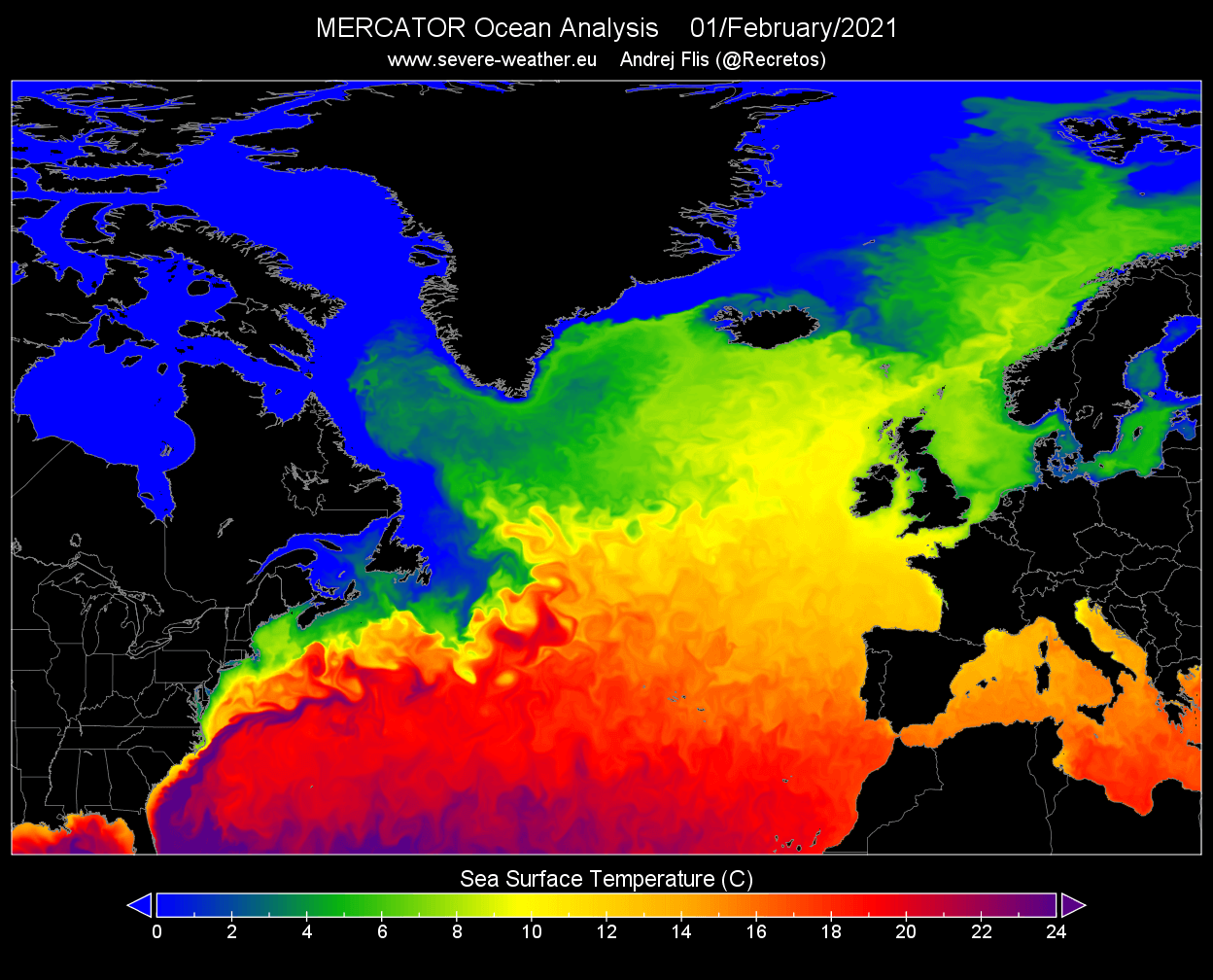 If we look deeper down below the surface, at around 380 meters (1240ft), the Gulf Stream is still quite obvious. But you can also better see the colder waters south of Greenland, where the ocean current sinks down as it becomes denser. 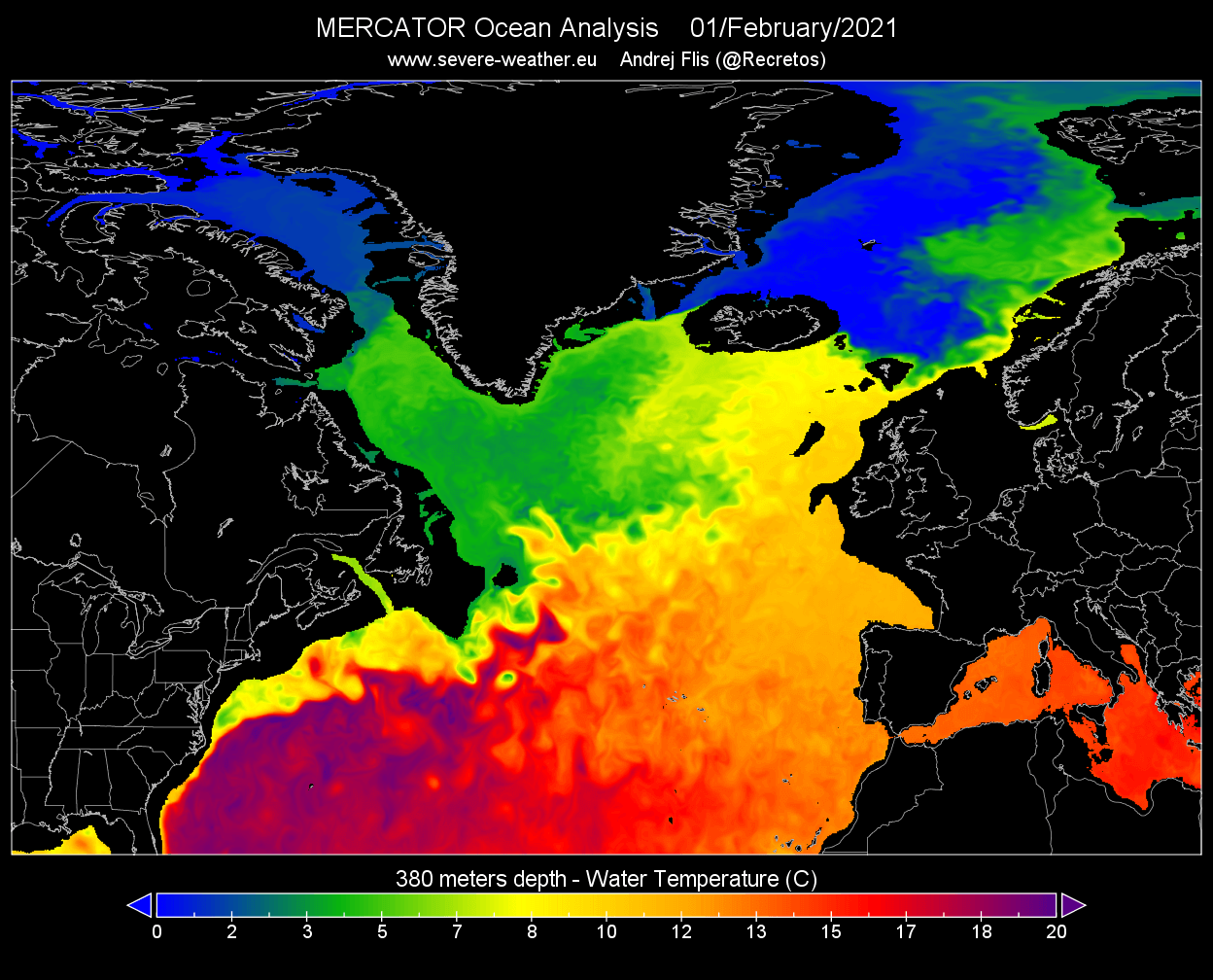 Still going further down, to around 1200 meters (4000ft), we reach the very bottom of the Gulf Stream flow. We can hardly see the warm current standing out, as we have warmer ocean temperatures further towards the east, around the European continental shelf. 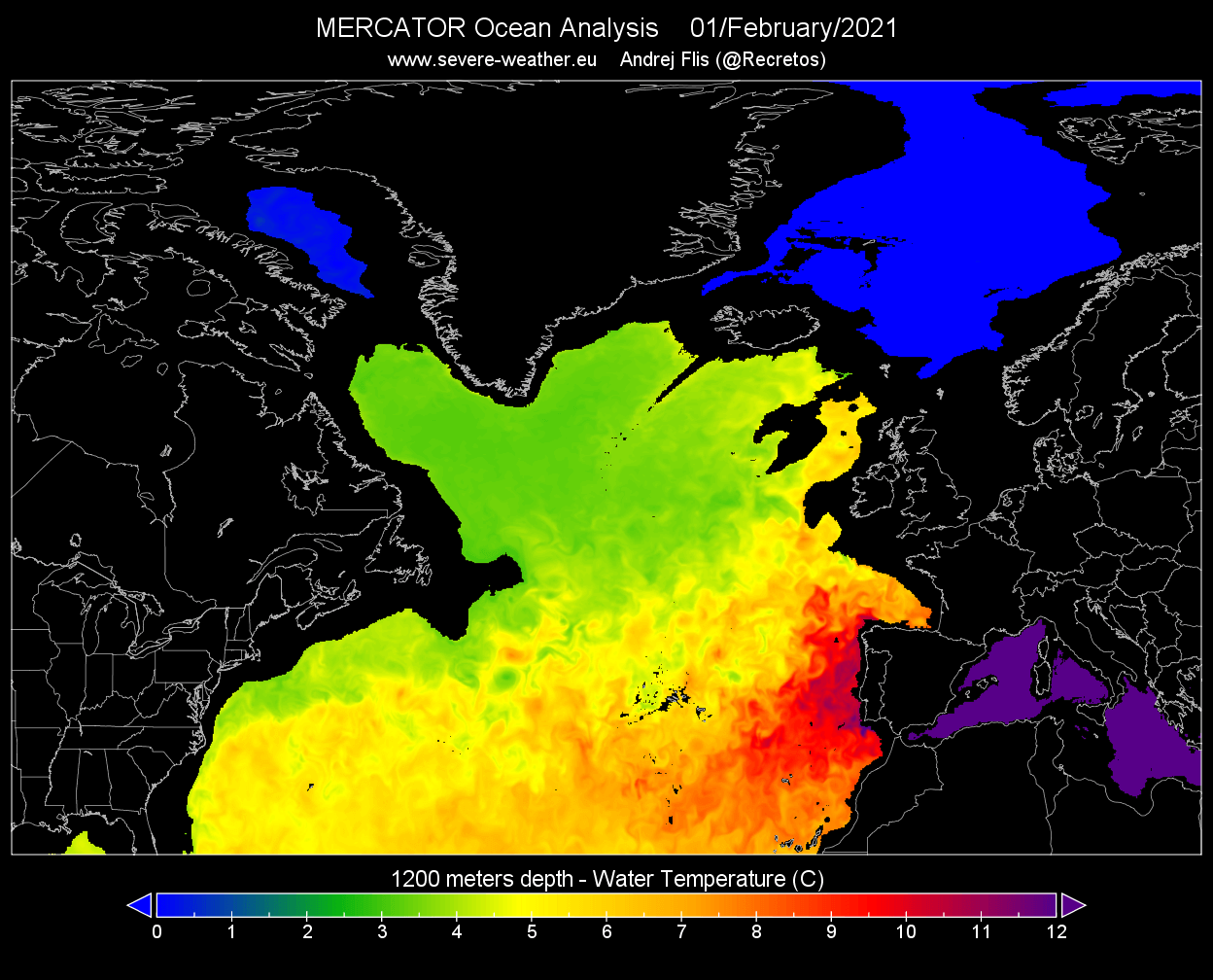 But recent studies and data show, that the Gulf Stream is actually losing strength, and is starting to collapse. We will look at the changes in the Gulf Stream and how/why it is collapsing in our next installment, so stay tuned.

As a Result of an Impressive Cold Blob Anomaly in the North Atlantic, Glaciers in Parts of Greenland, Iceland, and … – Severe Weather Europe – Menopausal Mother Nature

[…] The image above from Andrej Flis shows the ocean surface current speed, where the Gulf Stream stands out and can be seen in its most raw shape and form. If you want to know more about the Gulf Stream, you can read about it on Learnweather. […]