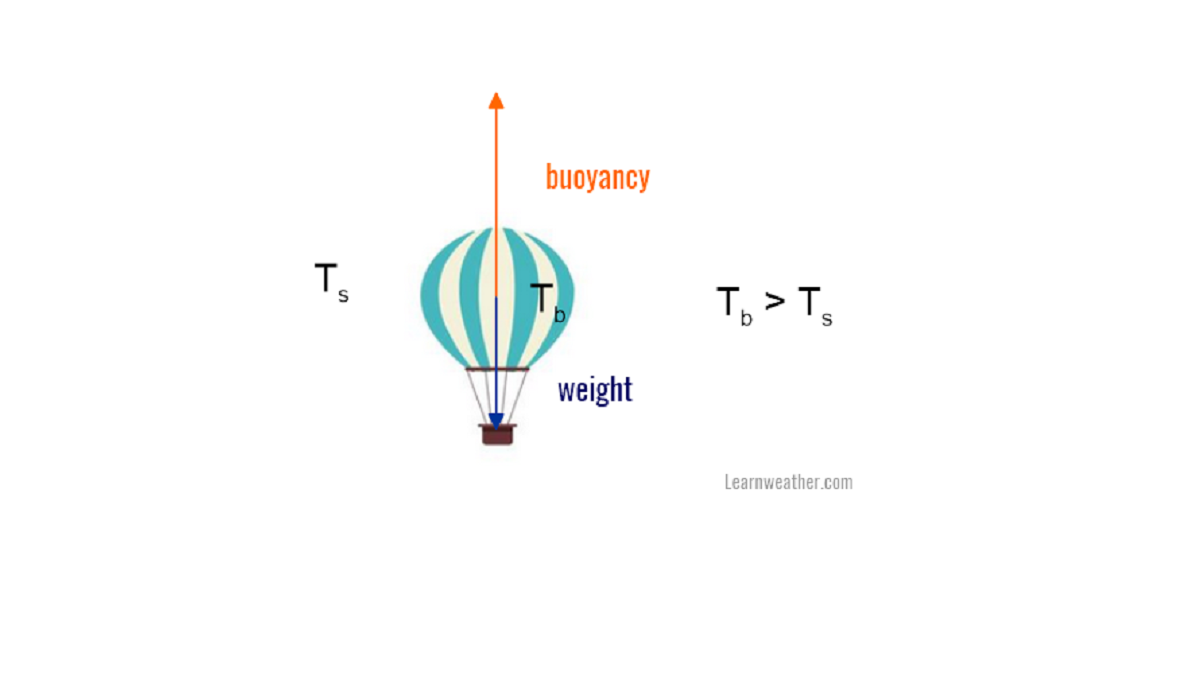 Convection is driven by buoyancy. So we will first define an air parcel. We are going to be using this term a lot. An air parcel is an imaginary volume of air. It can be at any altitude, any temperature, any pressure. Keep this concept in mind.

The fundamental physical phenomenon behind thunderstorms is convection. This is a process in which less dense fluid (be it a liquid or a gas) rises within a more dense fluid.

Buoyancy is an upward force experienced by an object immersed in a fluid. The force is equal to the weight of the fluid displaced by the object. If the object is denser than the fluid, it sinks – the object is negatively buoyant. If it is lighter it rises up and floats on the surface – it is positively buoyant.
Let us see some examples.

A simple example of positive buoyancy: place a piece of wood on water. Wood is less dense than water, therefore it floats. Buoyancy counteracts the weight and the net force on the piece of wood is zero.

If you submerge a block of wood below the surface and release it, it will buoyantly rise to the surface. Buoyancy is larger than the piece’s weight, therefore there is an upward net force that makes the wood rise.

Another example of buoyancy, much closer to the driving force of thunderstorms, are hot air balloons. Hot air balloons are filled with – hot air. The hotter the air (or any gas), the more it expands and the lower its density. As the hot air (Tb) contained in the balloon is less dense than the cooler (Ts) surrounding air, it is positively buoyant and forced to rise – taking the balloon and passengers with it*.

A hot air balloon uses gas burners to heat the air. In nature, daytime warming of the air near the ground causes the warm air to buoyantly rise.

Now back to that air parcel. If the air parcel is warmer than the surrounding air it will – the same as the air in the hot air balloon – buoyantly rise.

It will keep rising as long as it remains buoyant in the surrounding air.

Recap: this far we have found out that a parcel of warm air rises when it is surrounded by colder air. This is because the warm air is less dense than cold air and it rises due to buoyancy. This process is called convection.

Now we will take a look at how water in the air behaves and how it influences convection.

Water is present in the atmosphere in solid (ice), liquid and gas form. To understand weather and thunderstorms, we need to take a look at how water behaves.

Water changes states from vapor to liquid to solid and vice versa. The change from one state to another is called a phase change. To change water from solid (ice) to liquid (…water) to vapor (steam), you need to add energy (heat).

Fun fact(s): you need the same amount of heat to melt a kilogram of water ice at 0 °C as you need to heat the same kilogram of melted water from 0 °C to 80 °C. It takes a lot of heat to melt the ice! It takes even more heat to evaporate the same amount of water: it takes over 6 times as much energy to evaporate 1 kg of boiling water than to melt 1 kg of water ice!

You need to add heat to melt ice and evaporate water. In the other direction, as water condenses from vapor to liquid and as it freezes from liquid to ice, heat is released.

There is also a shortcut: water can transition directly from solid to vapor – this process is called sublimation. Energy-wise it is the same as other processes: it takes energy to evaporate ice, and energy is released when vapor goes directly into ice.